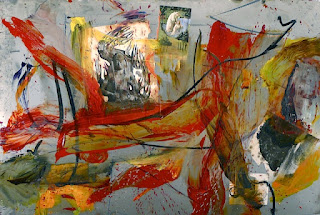 
Born in Denver, Colorado, Michael Chandler was a student of Stan Brakhage at the University of Colorado in Boulder during the late 60’s and attended Art Center College of Design in Los Angeles and the Jack Kerouac School of Disembodied Poetics at Naropa. He began showing his paintings in 1985 at the galleries of Salvatore Ala in New York and Milan. Chandler has been a gardener in the Hollywood Hills, done mining assessment for the Anaconda Company, worked on Christo's Rifle Valley Curtain project, painted baseball dolls for the Pittsburg Pirates and Cincinnati Reds, was a surveyor for Contact Logging in Philipsburg, Montana, painted walls at the Museum of Fine Arts in Boston, worked on the production of Walter Hill’s movie The Warriors, painted cartoon cells for Animalympics, did installations at the Mudd Club and Club 57 with Mary-Ann Monforton and worked as an assistant to Dan Flavin through the Dia Art Foundation. Among others, he has exhibited in Munich with Galeria Paal; in Seoul at Gallerie Seomi; in Bologna at Galleria Comunale d’Arte Moderna; in Rio de Janeiro at the Museum of Modern Art; at the Rhode Island School of Design’s Museum of Art and in New York City at P.S.1, the Drawing Center and the American Academy of Arts and Letters. Most recently his work could be seen at Jules de Balincourt’s Bushwick Basel. Chandler has worked out of his Lower East Side studio since 1980 and this is his first one person show in New York in 15 years.
Posted by Fred Valentine at 4:31 AM No comments: