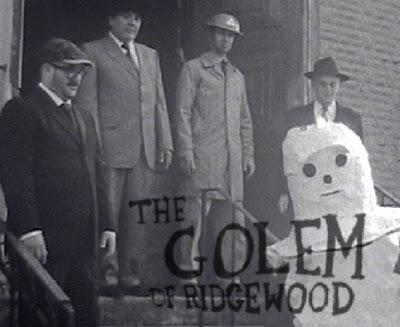 THE GOLEM OF RIDGEWOOD

464 Seneca Ave. Ridgewood, NY
Valentine is open Saturday & Sunday from 1-6 and by appointment on Fridays.
The exhibit runs through Sunday March 11. Valentine will be open until 10:00 on March 10th as part of Beat Nite.
L train to Dekalb
M train to Seneca
valentineridgewood@gmail.com

This exhibition commemorates a film made over 70 years ago by a young member of the Congregation Agudas Israel on Cornelia Street in Ridgewood, Queens. The film, which survives only in fragments, documents the efforts of Rabbi Jacob Weiss to build a golem, a supernatural being made of animated clay, to protect his congregation from their anti- Semitic neighbors in the early 1940s. In 2002 artists Jude Tallichet and Matt Freedman bought the Cornelia Street building thereafter known as “the ’gogue” and turned it into a studio and living space. While exploring their new property and neighborhood, they discovered the half-degraded film; they were subsequently able to recover props and artifacts connected to it. In seeking to contextualize these fascinating relics of Ridgewood’s recent past, Freedman and consulting art-historian Frances Rabinovitch have compiled the following timeline.

Eden−6000 BCE: G-d fashions Adam from the dust of the ground, and animates him.

Trojans before being killed himself, by Hector, at the city gates. Eventually, to break the

bloody stalemate between fortified Troy and the Greek besieging army, Odysseus the

Great Tactician constructs the Trojan Horse, a gigantic creature designed to protect its

makers and wreak havoc on its enemies.

Attica−540 BCE: The Kroisos Kouros, also known as the Anavyssos Kouros, is erected

to mark the grave of a fallen warrior named Kroisos. The well-muscled nude, an archaic

smile on his lips, bestrides a marble base on which is inscribed this admonition: “Pause

and show pity beside the marker of Kroisos, dead, whom once in battle’s front rank

for dwelling in a tub, as well as for his praise of canine virtues; he believes that human

beings live artificially and hypocritically, while dogs live in the present, free from anxiety.

Humans dupe others or are duped, but dogs will give an honest bark at the truth. The

London, England−1189: Richard Coeur-de-Lion girds for the Crusades. On the eve of

his embarkation, anti-Semitic rioting breaks out, encouraged by a rumor that the king

has ordered all Jews in England killed; the rumor is triggered by Richard’s decision to

bar Jews (and women) from his recent Coronation ceremonies. Mindful of the

destabilizing effect of such unrest as he departs for what may be years in the Holy Land,

Limassol, Cyprus⎯1191: Richard conquers Cyprus. Part of the booty is a trove of

Trojan artifacts, including regalia believed to belong to Achilles. Coeur-de-Lion seizes the

armor as a royal perquisite, wearing it at the siege of Acre. Despite his victory there,

Richard falls out with his erstwhile ally Leopold V, Duke of Austria. The Duke in turn

seizes the armor as spoils. Eventually, it makes its way to Prague.

battle, and an iron limb is forged to replace it. Far from a simple Ersatzhand rigged by

the village blacksmith, the prosthesis is a state-of-the-art construction fabricated in the

technically advanced workshops of Nuremburg and Augsberg. With it, Götz von

haft of his lance, but a playing card, and even a quill pen. He continues his military

career, and gains fame as a poet and memoirist. The “Götz curse” later becomes a

arse”), attributed to the knight by Johann Wolfgang von Goethe, who writes an

eponymous play based on Götz’s life.

ben Bexalel, anxious to protect his people, sculpts a golem from clay and brings it to life

by writing the names of G-d on the figure’s forehead⎯or, alternatively, on a slip of paper placed in its mouth, or in its shoe. Rabbi Leow, knowing something of Richard Coeur-de- Lion’s behavior following the London riots 361 years before, deems it propitious to kit out his creation in armor proven on the bodies of two famous warriors, one pagan and the other Christian. In fact, however, only the helmet of Achilles now survives in the royal treasury. Leow somehow secures it for his golem.

sword (or axe) to kill those miscreants who threaten Jews in the marketplace. Stories of

Prague, Bohemia−1648: The Bohemian princes’ cabinet of wonders is pillaged in the

aftermath of the Battle of Prague. A centerpiece of the collection, the purported Beast of

the Apocalypse or Seven-Headed Hydra, is seized by the German General Hans

Christoff von Konigsmarck. He removes the Hydra to Hamburg, where it becomes the

prized possession of the mayor.

Hamburg, Germany−1735: Carl Linnaeus, passing through the city on his way to study

at the University of Harderwijk in the Netherlands, describes with a taxonomist’s

precision the dress and rituals of local Jews. He also exposes the Seven-Headed Hydra

as a hoax constructed⎯allegedly by fifteenth-century monks⎯using snakeskins and the jaws and paws of weasels. Linnaeus is forced to leave Hamburg quickly to escape the mayor’s wrath.

Frankfurt, Germany−1773: Goethe, having been dissuaded by his father from pursuing

his desire to write, practices law. For pleasure, in a few weeks’ time, he pens his drama

Götz von Berlichingen; the next year he will complete the book that brings him universal

fame, The Sorrows of Young Werther. During this period, he is also at work on what is

now known as the Urfaust, though the complete Faust is not published until 1808.

a party piece for six voices based on a text from Goethe and titled Leck mich im Arsch.

When the song is published in 1799, after Mozart’s death, the lyrics are bowdlerized to

inventor Sir Humphrey Davy and by the physicist-physician Luigi Galvani, along with 3

Émile, or On Education; and both The Sorrows of Young Werther and Faust, by Goethe.

Shelley’s novel is interpreted, in ensuing decades, as a metaphor for the dangerously

hubristic achievements of science, as well as the plight of various oppressed groups,

including American slaves, the starving Irish, and the English lumpenproletariat. Less

well-known is a reading of Dr. Frankenstein’s Monster as “the goyische golem,”

sometimes called “the Mad Jew in the Attic.”

boards, faceless cutouts, and passe têtes⎯that allow people to pretend to be,

amusingly, that which they are not. 29 years later, Coolidge paints the well-known Dogs

Bibendum, accompanied somewhat cryptically in advertising posters by a motto from

synonymous in popular imagination with a bundled-up or “pneumatic” appearance: “I [or

including the Diogenes Brewery. Many Diogenes employees worship at the nearby New

maternal uncles are rabbis. Having found that rabbinical school does not suit him,

however, Singer takes as his middle name the possessive form of his mother’s given

name, Bathsheba (“Bashevis”) and begins a career as a writer.

opens. An attic storeroom, located adjacent to the projection booth and accessed by a

small door behind the candy counter, later becomes an unofficial clubhouse for

Workers Accident Insurance Institute of the Kingdom of Bohemia, invents the hard hat.

Ridgewood, Queens−1924: Jewish merchants are taking over German businesses on

sold to Jewish leaders, who rededicate it as Congregation Agudas Israel.

Prague, Bohemia−1925: Young Jacob Weiss, despairing of his talent and stung by his

father’s remarks about the need for a Brotberuf (literally, a “bread job”), gives up the

study of literature and enrolls in rabbinical school. Upon his ordination, he emigrates to

Monster, plays to capacity crowds at the Ridgewood Theater.

and churches, to hold men’s hats during services. In the same year, Eastman Kodak

releases the Standard 8mm movie camera for home use.

ambitions, and Tilly Fleischer wins the women’s javelin competition for Germany. She is

one of Hitler’s favorites. Leni Riefenstahl documents the games for her film Olympia.

He recruits a ring of pro-Nazi agents and couriers, many of whom are brewery workers.

been a clearinghouse for information passed by the conspirators.

takes root in the area. To reassure his flock, Rabbi Weiss creates his golem. A young

congregant, Elias Bergman, stumbles on the plot; his father, the inventor, belongs to

Edgar’s 8mm camera in hand. From the surviving footage, it appears that the boy is

discovered while filming. Perhaps considering the uses of newsreels as propaganda,

the death camps, the rabbi then allows him to film openly.

frequenters of the Ridgewood Theater’s attic hidey-hole, become an “item.” Anxious to

enhance his reputation as an artiste, Elias boasts to Edith that he could screen a film at

the Ridgewood if he wished. She does not believe him. Daringly, he replaces reel 2 of

Orson Welles’s The Magnificent Ambersons with his golem footage. A melee erupts in

the theater, but Bergman’s film fortuitously breaks in the projection gate. The

Air Force. His father, at home in Oxford, decides to complete a previously abandoned

project, which he serializes in letters for his son’s entertainment. The sprawling saga of

the victor, devolves into a misshapen creature that Tolkien christens Gollum, after the

Sudan−1965: Leni Riefenstahl lives with and photographs the Nuba. Like Tilly Fleischer,

the tribesmen are adept at spear-work. The same year, in Manhattan, advertising

Ridgewood, Queens−1975-1980: The Agudas Israel congregation is in decline. Regular

services are no longer held in the sanctuary, although a reduced congregation continues

to worship on the site, establishing a smaller ark, with its own Torah, in the basement.

Maintenance is deferred, and the building falls into disrepair. Elias Bergman dies.

a resemblance to both the Pillsbury Dough Boy and Michelin’s Bibendum; a columnist in

Ackroyd explaining his brainwave: “You created this white monster to sell your products,

and it seems harmless and puffy and cute—but, given the right circumstances, everything can be turned back and become evil.”

free newspaper The Onion. Each week, a new project is presented for Freedman’s

followers to cut out and assemble, e.g. a series of dioramas depicting World Leaders

Stranded on a Desert Island, including full-frontal-nude paper dolls of Margaret Thatcher,

outraged by what he understands as disrespect aimed at authority, refuses to print any

rhymes with “promise”; the portal privileges “search terms popular with male users.” Its

name is reportedly an acronym for “Bitter Old Men In Suits.”

Agudas building. In accordance with Jewish law, in order to effect the transformation of

the structure from a consecrated place of worship to a private live/work space, the wood

that has lined the two arks of the covenant must be buried like a human body. The

Torahs themselves are donated to the Israeli army.

Edith Weiss Bergman, one of few congregants remaining in the neighborhood, is battling

cancer. She has, however, been athletic all her life, and remains strong enough to walk

her dog, Little Eva. Tallichet and Freedman, out walking their own dogs Sparky, Fleurry,

and Pluto, befriend her. Mrs. Bergman tells Tallichet and Freedman the story of the

temple’s golem, her husband’s footage, and the romantic bet. She reasons that the lone

print of Elias’s film is likely to be where they left it, in the defunct “clubhouse.”

Ridgewood, Queens−2008: The Ridgewood Theatre goes bankrupt. The building is

offered for sale for $14,000,000. Tallichet and Freedman tour the premises posing as

prospective buyers and, under the pretext of examining water damage in the attic,

“The Golem of Ridgewood.” They spirit it back to their home. The film is badly

deteriorated, with only a few minutes’ footage intact.

Freedman and Tallichet recover parts of the lost golem. The left hand is buried the

garden; the odd object they had previously removed from the synagogue’s safe (in what

is now their living room) is revealed to be the right or “iron” hand. The sword is in the

shed. The head, complete with helmet, turns up in their own attic, which the two

sculptors use as studio storage.

Posted by Fred Valentine at 9:22 AM No comments: