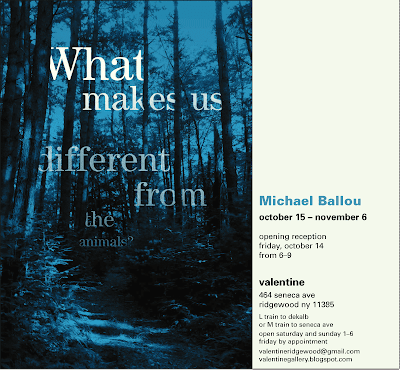 What makes us different from the animals?

One day, the fish crawled out of the swamp. They had pairs of eyes, dark eyes, and large teeth. Over time, of course, the temperature would drop, and the fish would grow hair. Their feet would grow hooves and claws. They would bellow and groan and populate the earth. And soon they were on pleasure cruises, slipping away from the ballroom to woo each other in the salt air up on deck, the ancient, gray-green sea stretching endlessly under the moonlight. What next? Perhaps nothing was ever next and humans are still lost in transition from microbe to beast to sentient aethete. We are still trying to leave the swamp, but we don’t know what limbs we need for the next step, as it were.

Is that so? asked the princess, her glassy eyes reflecting the spray of purple asters she held in her hand. I believe I should grow some sort of fins right between my two cerebral hemispheres. I think that I should swim into my synapses.

Don’t you mean your sinuses, laughed the handsome swain at her side.

She frowned and broke his head off — snap!— just like that. She peered down his neck. There were no fins inside, or anything else. But drifting out the chimney that used to be his neck was a fine mist — his narrative entrails now liberated, creating a bewildering perfume that spread across the garden like regret. From on high, the beasts looked down: golden calves and portentous ravens, flowered elephants and sacred wolves. Hollow-eyed creatures all, they uttered low cries as they breathed in the fractured stories of those who had passed their time among the living.

Michael Ballou is a visual artist who works in diverse media, including film, installation, performance and sculpture, and has a history of organizing events that foster interaction between artists. In recent years, he has exhibited at the David Zwirner Gallery, Pierogi 2000 Gallery, the Brooklyn Museum of Art, Xavier Hufkens Gallery, the Kunsthalle (Vienna), among others.